Our previous text introduced the topic and addressed a few different perspectives of innovation, and this is its sequel. We discuss here a few relevant economic segments in their regard to innovation, how this connects with FinTech and what countries do – especially differently from one another – in order to foster economically interesting, innovative projects.

While we previously discussed how industry and small companies deal with innovation, there is a point in looking at the entire private sector – including the extremely important Mittelstand here in Germany – as to their incentives and relationship with it.

For the private sector, the main innovation driver is profit generation. As the main purpose of companies, increase or maintenance of profit levels are a key part of any company’s success, and hence why they choose to allocate resources to one or another initiative. In mature competitive markets, the established players already have a more or less consolidated market share, and doing more of the same just doesn’t allow for growth within current markets nor to expand it to new frontiers, and that is where innovation can create new opportunities.

Another important goal many innovative products, services or designs bring is cost-saving. If there is a hassle-free method to increase margins, since it barely touches clients, is to quietly reduce costs without impacting quality. This is surely one of the goals amidst the push in Germany for digitalization. It surprises me, however, to gather that the consensus in this country seems to be favourable to incremental innovation but much less to disruptive innovation.

So what can concretely evolve in our relationship with Financial Services? In my view, plenty. Some of the cool FinTech Startups that I’ve come to use and enjoy have significantly reduced the friction between service providers and consumers, sometimes becoming a meaningful service provider themselves.

An example of financial service that has brought me a lot of headache over the years is foreign exchange. Banks widely offer currency exchange, but the serv 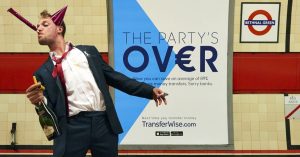 ice is generally either unpractical, expensive or both. Transferwise is a British FinTech offering automated easy-to-use and inexpensive foreign exchange allowing for a wide range of currencies and countries. Their growth was a result of facing banks straight on in this niche market of foreign exchange. The strategy was to deliver a higher level of service for a fraction of the cost. Many different segments of finance could go through a similar process, unless you as a customer are satisfied with your bank’s service levels, or innovation record?

As previously mentioned, countries deal differently with innovation. Some choose very specific sectors to incentivize, believing they are more prone to innovate and bring economic development. Other countries take a more horizontal approach, for instance supporting small and medium size companies. Of course many lack specific policies in this area, as a consequence of either political decisions or economic restrictions.

One of the pre-conditions for companies to invest in producing patentable novelties is the belief in the protection system around intellectual property, which avoids other companies to copy and use their new design, product or name. Sure, the state can focus on this bare minimum of not getting on the way of innovation by deregulating and allowing companies to work more freely. In a lot of cases, however, countries also actively promote investment, even though there is controversy around how efficient such policies are, such as depicted by comedian John Oliver.

In my country of origin, Brazil, there surely is wide influence of our latin temperament, economic ups-and-downs, and also a divided political arena since at least the last elections. While in recent years neo-liberal policies have been gaining ground, the reality of Brazilian recent history is that after our military dictatorship elections were often won by candidates proposing left-leaning policies, with the social-democrats being considered relatively right wing (until this year’s election).

Brazil has tried over decades to push certain industries time and again, such as that of the Bio-Ethanol. Such policies, however, had  relatively little, temporary or just local successes. Another important tool for developmental public policy were the public banks, such as the one I worked for, BNDES, which at the same time supports extremely interesting projects and hasn’t had any internal issues but suffers anyhow with a problematic public image in a country where corruption has dominated the headlines. I also shouldn’t forget innovation-centered organisations such as Finep, with its successes and limitations showing over the years.

Other countries like the United Kingdom have a strong focus on reducing red tape, and one of the big advantages of this jurisdiction is the sandbox approach – in short it’s a lighter regulation for small new players – which for instance in FinTech is a significant enabler for new companies. More generally, just noting that their financial sector regulator invests time and effort in innovation is per se meaningful and speaks volumes about how the UK supports innovation.

In Germany’s case, I haven’t been here long enough to make a deep assessment, but of course I already have an impression. German regulations, especially from a foreigner’s perspective, are very complex. In my opinion, however, rules tend to not only make sense, but also encompass both general cases and carry exceptions for special cases, which is a good sign.

Most incentives I have seen, on the other hand, are rarely bold in the sense of actually deregulating or a clearly taking the monetary issue out of the table. Policies focus rather on a shared-risk, shared-effort approach through which the general burden or cost is reduced, but you never get the impression of getting an excellent deal, since you are focusing on an incentivized segment. This is what I have so far observed, but I would enjoy eventually doing a comparison between – for instance – French and German incentive policies to draw some more concrete conclusions.

How do you look at innovation?

We have looked at different angles of the innovation spectrum over two posts, including private sector and passing by the third sector, and finally discussed FinTech and how selected countries deal with innovation. We want to know nonetheless what innovation means to you personally. If you are an early adopter, do you get the latest products for your own satisfaction, or is it important to you to be more up-to-date than your group of friends or family?

How innovative is the organisation you work for, or the team you are a part of within the organisation? I’ve seen situations in which both team and company are leading completely new projects, but for some reason the team didn’t feel like their environment was in any meaningful way innovative. Our proposal is to look beyond innovation as the buzzword and try to understand it both in the market’s historic and taking account of its different perspectives.